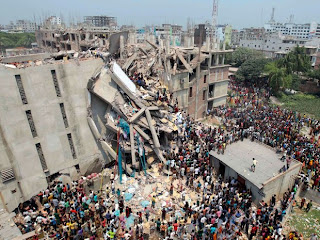 The garment factory collapse in Bangladesh was one of the most tragic industrial catastrophes in recent decades.  Over 1100 dead textile workers have been recovered, making it the largest textile industry tragedy and the second worst industrial disaster after Bhopal where 2,259 people died in 1984.  This particular catastrophe hit home to Canadians because one of our major corporations, Loblaw, sources garments from this factory for their Joe Fresh line.

The public’s response to the tragedy is one of shock and horror, with many consumers pleading ignorance that they were completely unaware of the conditions surrounding the making of the very products they wear.  Some have promised to boycott the Joe Fresh line to voice their dissatisfaction with the conditions in Bangladesh.   Perhaps not surprisingly, the general public has a short memory when it comes to the working conditions of those manufacturing their garments.  Issues of unfair and unsafe working conditions in Asia have been around for decades with Nike taking a brunt of the blame back in the 1990s when they were boycotted for purchasing from suppliers employing children and paying workers below living wage.

At first blush, it appears that Loblaw is taking on an accommodative or even proactive strategy in light of their recent commitments to provide financial assistance to injured workers and families, rehabilitation efforts for injured workers, as well as a joint program with Save the Children Canada and Save the Children Bangladesh to “provide life skills and workplace support for garment industry workers and their families”.  The company also committed to joining other international retailers to source garments from regularly inspected individual factories and to make the reports public.

I would argue that this approach is not accommodative or proactive but at best defensive.  The response by companies like Loblaw is meant to communicate to their consumers that they will not stand for conditions like these in their supply chain.  Yet the mere decision, however many years ago, to source from a place like Bangladesh is an explicit position enacted by Loblaw that it is interested and willing to exploit a labour market that represents a huge cost saving to the company.  But this cost saving is not some fluke opportunity for an international retailer.  It is instead an outcome that is completely dependent on particular worker conditions enabled by poor regulatory and legal institutions and citizen desperation.  What is more, these sorts of conditions are not new to the textile industry.  As already mentioned, these issues have been around for over 20 years with case after case of major brand names demonstrating complicity in some unethical supplier behaviour.


So, to me, companies like Loblaw fail to demonstrate responsibility in their decisions until they are forced to as a result of some tragedy that could irreparably damage their image.  But until that happens, we will see no valiant effort to address worker rights.  What we see now in their response is merely an attempt to distract the consumer and the broader public that they are at best complicit as a result of their strategic decision to reduce costs by sourcing from an exploitative supplier context and that the lessons learned by their peers well before Joe Fresh even existed were completely ignored for the sake of shareholder wealth creation.
Posted by Mike Valente at 9:05 AM