What is the Investor's Role in Sustainable Business?

A couple of days ago, my students and I attended a presentation by Bob Walker, Vice President of Ethical Funds Limited, a company that prides itself on being a leader on what is known as socially responsible investing (SRI). Unlike many other SRI fund houses that influence companies based on their decisions to invest or not invest in their business, Ethical Funds Limited invests in companies with the intention to influence their business through shareholder resolutions and a subsequent engagement process. One of my students felt that this was more of a marketing campaign than a positioning strategy.

So which has greater impact? Investing in a "not-so-good" company and using your role as an investor to change company behaviour OR pulling your investment as a message to the company that despite the potential return you would get, you will not stand for their activities?

Answering this question might depend on how much influence an investor can have. In his blog, Felix Salmon argues that at the end of the day, unless you’re a significant investor, your influence on a firm is minimal. Salmon nicely describes a 'slap in the face' scenario where a conscious investor who owns 1/220,000 of a company naively thinks that he's changing behaviour when all the while the company is using his money for a $4 million lobbying effort to void the firm from California’s 2006 Global Warming Solutions Act.

On the flip side, one can argue that pulling your investment likely doesn’t have that much of an impact either. So perhaps the question is not so much about impact as much as it is about leadership. Leadership to me is going against the mold by taking a courageous stance that conforms to your values in a way that aspires others to follow. Is Ethical Funds a leader?

Some would argue that Ethical Funds is having their cake and eating it too. A substantial investor in the oil sands affords the firm with massive returns on investment. Is their discreet shareholder activism merely a means to greenwash their greedy investment strategy? Does it afford them enormous returns while at the same time making it seem like they are doing good things to mask those 'dirty' returns? Is this any different from indulging in carbon intensive products and than purchasing offsets?

Or is this indeed a genuine effort on the part of an investor trying to make a difference in the behaviour of the companies in which it invests? I have a feeling this debate will grow in popularity as more and more investors get involved in this space.
Posted by Mike Valente at 6:57 PM 2 comments:

You can't help but use the pun when these stories come up. The David Suzuki Foundation issued a report today saying that Canada needs stronger rules to keep toxic chemicals out of personal care products. The study asked 6200 consumers to inspect ingredient lists for 12 sets of potentially harmful chemicals used in cosmetics. Almost 80% of the products reportedly contained at least one of these dozen ingredients and more than half of all products reportedly contained multiple ingredients.

Click here for more info on the study
Posted by Mike Valente at 9:16 AM No comments: 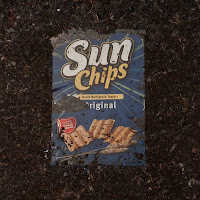 PepsiCo (aka Frito-Lay) recently pulled the plug on their compostable chip bags, changing back 5 of the 6 sun chips flavors to traditional packaging, citing noise complaints from consumers as the main reason. Seems like the ecological benefits of the chip bag trump the noise burden that comes with it. If we’re seeing resistance to what, comparatively speaking, is a trivial sacrifice for environmental benefit, imagine the kind of resistance we’d see from more fundamental changes.

The Colbert Report presented a rather amusing spoof on this, extending it to resistance to wind farms. He goes on to suggest that to avoid the noise, we should build quiet coal technologies, and breakthroughs in silent oil. And when the coastal cities are underwater from the arctic ice melt, their wish for being quiet will be fulfilled. Hilarious!
Posted by Mike Valente at 3:07 PM No comments:

"It's a Complete Reboot of How We See Things", says James Cameron, director of Avatar when commenting on the need to change how our industrialized society works. Having now watched Avatar, I can certainly add this film to the growing list of films that tend to vilify the private sector. I think Avatar does a fantastic job at illustrating the disassociation our society has with nature and indigenous people, their culture, way of life and the surrounding environment. Interestingly, the actor most disassociated was the business driving the military to blast their way to the centre of the Niva people. The movie nicely depicts our very human-centered or anthropocentric perspective where we, as humans, are superior to nature. Business is predicated on the notion that natural resources represent an infinite bucket of cost-free inputs, of which we have the ‘right’ to exploit because of our superiority and intellectual prowess. Indeed, scientists are now debating whether the last millennium should be called the anthropogenic era in light of humanity’s profound impact on the natural environment.

But clearly this is an exaggerated portrayal of business’ impact on indigenous communities and the environment, isn’t it?

In many ways, Avatar represents an amplification of much of what has already happened or is presently happening in many regions around the world. Not long ago, Shell applied to the Supreme Court of British Columbia to forcibly remove elders of the Tahltan who were blocking access to exploration sites. Shell claimed that the environmental risks on the community’s sacred headwaters were exaggerated and that government permission gave them rights to these lands. In Sudan, Talisman Oil was accused of playing an enabling role in civil strife that still exists today. In Nigeria, Shell recently settled out of court and paid $15.5 million dollars in damages to the Ogoni people in Nigeria. Although they never admitted guilt, there was public sentiment that Shell was at least complicit if not involved in the execution of 9 human rights activists, not to mention the environmental devastation imposed on the Niger Delta during their tenure there. Oil company Tullow Oil PLC has been keen on drilling for oil beneath Murchicson Falls National Park in Uganda. “We don’t sleep” says Akelo Oliver, a fisherwoman on the shores of Lake Albert on the outskirts of Buliisa. Standing in front of an oil rig she explains frustratingly that "No one has talked to me or told me about what they're doing."

What about Canada’s oil sands? In response to an invitation of First Nations activists in Fort Chipewyan, Hollywood powerhouse James Cameron visited the Alberta oil sands this week. Since filming Avatar, Cameron has been getting involved in a number of conflicts between industry and indigenous people. Visiting the Amazon to support a battle against a dam project, he said, “This is how the civilized world slowly, slowly pushes into the forest and takes away the world that used to be”.

Unfortunately most of the media in Canada covered extensively the first part of Cameron’s trip where he met with oil executives and government but barely touched upon the outcome of meetings with the aboriginals who invited him to the oil sands in the first place – at least not yet. Ironically, what was meant to be an opportunity to communicate the negative externalities of the oil sands to the rest of the world was somewhat hijacked by interests who felt that this was an opportunity to show the world that the oil sands is an excellent place to invest and source energy. Smaller media sources communicated that Cameron was quite adamant about the need to slow "the pace of oilsands development and to do more to protect the environment"

What caught my attention was Cameron’s reflection after meeting separately with the Canadian Association of Petroleum Producers, oil and gas companies like Synrude and Cenovus, and government. He said that “all of these sources have their own specific agenda” implying that they all wanted to show him things that would pull him to their side of the argument. This reflects an “us versus them” mentality that has pervaded the relationship between industry and community activists for decades. We see this all the time when business executives perceive certain stakeholders as a threat to the achievement of their objectives and vice versa. I see this mentality in my business students regularly who, to their defense, are trained to adopt a war-like mentality where any stakeholders that represent a threat to the objective of shareholder value should be approached as an enemy. This is no exaggeration. Business students, as part of their program requirements, take a course on strategic management, a topic that carries with it an underlying metaphor of war where customers, suppliers, government, communities, and the environment should be handled strategically as in warfare.

Clearly, what was portrayed in the Avatar movie was a war between business and indigenous people and by default, the environment. Perhaps this is what Cameron means by a reboot. CEOs, themselves, are becoming dissatisfied with how our industrialized society works. Consider these quotations:

“The way I’ve been running Interface is the way of the plunderer. Something that is not mine. The day must come when this is illegal, when plundering is not allowed. So I said to myself, ‘someday people like me will end up in jail’” (Ray Anderson, CEO, Interface)

“I am convinced that when our kids are fifty, and they look back at us they are going to ask” What were you thinking”…why were you so slow to do the right things?” (Jeff Immelt, CEO General Electric)

"The same stale, business-as-usual thinking that has driven us to our current state of emergency will continue to endanger our safety, our livelihoods, and our planet. We need new thinking, new leadership, and innovation to create a post-carbon economy" (Richard Branson, founder Virgin Group)

What is this telling us? I strongly believe that most actors – business, government, communities, consumers, investors – do not want to negatively impact the environment or the sacred traditions of indigenous peoples. But we keep on doing it. Is it inevitable? Are managers uncontrollably drawn into a zero sum game where tradeoffs are a natural part of development? In an increasingly complex operating environment where tradeoffs created by business start to become a reflection of an outdated simplified worldview rather than a natural consequence of modern capitalism, only those managers rebooting their worldview and their organization will survive.
Posted by Mike Valente at 2:32 PM 3 comments: