Recently, two of Quebec’s asbestos mines shut down amid noisy political debates and a dramatic anti-asbestos news conference Thursday on Parliament Hill. I find this to be an interesting illustration of how fast-moving a relatively recent ballooning of criticism can turn into the dramatic stoppage of operations of an industry that has been left relatively untouched for years.

The growing interest was partly spawned by the Daily Show with Jon Stewart where Asaaf Manvi, one of the show’s correspondents, implicitly ridiculed Canada’s hypocrisy for exporting a substance (asbestos) that the country itself has banned in use domestically and is currently removing from federal buildings. What is more, Canada has fought tooth and nail any United Nations’ efforts to label asbestos a toxic substance, which would place a strong sanction against the use of asbestos in industrialized countries.

Analogous to many CEOs and senior executives that have ignored the call for greater responsibility in the supply chain, Stephen Harper reacts to criticism by saying that the federal government’s actions are merely a response to global market forces. More specifically, if India is willing to purchase the product, we won’t stand in their way simply because they do not have the appropriate education and infrastructure in place to assure the substance’s safe handling, let alone the precautionary measures in place to withstand future exposure of the substance when buildings age and erode.

A very similar argument led to the boycott of Nike in the 1990s when then CEO Phil Knight argued that poor working conditions and penny wages in their supplier factories is not Nike’s concern and is merely a product of a global economic system. Company after company has fallen victim to "reacting" to criticism by arguing that what goes on in their supply chain is not their problem because they don't technically own those operations. Coca-Cola’s blatant disregard for killings in bottling factories, Apple’s disregard for suicides in its Foxconn factories, Hershey’s disregard for unfair treatment of cocoa farmers in Ghana, the list goes on and on. They typically begin with a reaction that absolves them of any responsibility. They then engage in a public relations campaign to distract the public from these problems before finally admitting that there is a problem and that they have to accommodate the requests put forward by activists and eventually the mainstream public. Unfortunately, companies do not engage in this “accommodative” stance until they’ve suffered financially or see fairly dramatic financial repercussions for not responding in a favorable way as determined by the public.

Why aren’t companies learning from other industries as they get lambasted in the form of heavy criticism? Is their memory that short? Is it a case of an evaluation of risk where they conduct a cost/benefit analysis of taking responsibility in the supply chain and comparing that with the potential implications of doing nothing? Is it the short-termism of the investor community that detracts from any consideration of longer-term financial implications?

Going back to the asbestos industry, the business community unfortunately operates under a very simplistic definition of value. Value, to economics and business, is the difference between the opportunity cost of holding on to the asbestos as an extractor (versus selling it) and the price customers are willing to pay for products that have asbestos in it. Notice that this definition is purely financial. That is, value is determined based on the cost of making the product and the cost of purchasing it. Nowhere in here is there room for calculating the erosion of value in terms of health or the environment.

So one answer to the above questions (why do managers continually fail to see the freight train associated with ignoring the supply chain), it becomes somewhat clear that managers are ill-equipped to incorporate social and environmental calculations into their decisions. And by ill-equipped I don’t only mean the skills required to understand the financial implications of these issues, I also mean the cognitive ability to first see their decisions in this way. So in effect, they cannot foresee that ignoring social and environmental considerations may someday influence how much a consumer is willing to pay for a product. Put another way, the executive is blind-sided by the perception that consumers only use financial-based variables in their purchasing decisions. But time and time again, firms have been railroaded for ignoring public perception on acceptable behaviour of business. Wouldn’t it be easier if consumers didn’t care about these sorts of issues?
Posted by Mike Valente at 12:51 PM No comments: Links to this post

The Globe and Mail Compromises Truth for Politics 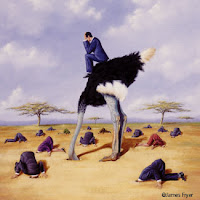 Margaret Wente, a right wing columnist for the Globe and Mail, recently argued that it is wrong and disastrous to science to suppress debate on climate change. She puts forward a string of anecdotal and disproven information to weave a web of doubt of climate change for the innocent and less-educated reader. She refers to Roger Pielke Jr. “one of the saner voices on the climate scene”, yet doesn’t point out that he presents no peer-reviewed empirical evidence to oppose the 97-98% (tens of thousands) of scientists who argue and have proven that climate change is real and man-made.

The question of whether Canada should or should not support a renewal of the Kyoto Protocol is a separate issue from what Wente is referring to here. Her objective is to create doubt when there is none in the science on climate change. It is perhaps no coincidence that this story has been published in the lead up to the UN Climate Conference on Monday, Dec. 5th, 2011 in Durban, South Africa. At this conference, Canada is expected to represent one of the strongest opponents to renewing the Kyoto protocol and, for that matter, any international commitments to mitigate climate change.

I fear that the newspaper’s decision to publish this highly inaccurate and misleading column is a political one rather than one that is in the best interests of the public. Here’s why:

The problem with these opinion pieces is that they plant seeds in the minds of readers that climate change is still debatable. That is, readers walk away with the belief that there is perhaps a 50% chance that the science behind climate change is accurate. The amount of news coverage in mainstream media reflects this with half the stories arguing that climate change is real and man-made and half the stories arguing the opposite. Yet if the media were doing its job and communicating to the public the truth based on sound science, we should see 97-98 out of 100 stories on climate change indicating that it is real and man-made and 2-3 out of every 100 stories with arguments against this science.

In effect, readers should understand that there is no longer any debate on climate change. The science is therefore clear. And by clear I don’t mean 100%. This is impossible. No concentration of scientific studies on a complex issue like this can claim 100% accuracy. We go on probabilities. Decisions are made everyday and conclusions to guide theory are made everyday based on 95% probability levels and sometimes 90% probability levels. This means that if we were to run experiments on a particular scenario, 19 out of 20 experiments would produce the same result. For climate change, we’re at a similar level of probability. This doesn’t dismiss the opportunity to prove these 97%ers wrong. But there needs to be a mountain of peer reviewed empirical studies to raise such doubt and there are few credible studies denying that climate change exists or is man-made.

Wente’s writing is outdated and completely inaccurate. Like most scientists who claim that climate change is not happening, she picks out isolated statistics yet overlooks the overwhelming evidence that opposes these outliers. The fact that we’ve experienced the warmest weather in 13 of the last 15 years is not discussed, nor is the rather remarkable rate at which the polar ice caps are melting, or the dramatic increase in freak weather events in the last decade. The list goes on and on and she speaks as if these rogue scientists represent mainstream thought.

Claims like “no one knows with any certainty the exact impact of carbon dioxide emissions” is completely inaccurate. So is, “what long-term climate trends will be or the effect of other factors, such as the sun”. These alternative explanations have been disproven time and time again and are therefore unrelated to the changes in climate we’re seeing today. She spends time talking about climategate despite the fact that three independent studies were conducted to see if the science behind climate change was compromised as a result of these emails. All three independently concluded that there is absolutely no evidence that the science on climate change has at all been put into doubt as a result of these scandals. Recently Exxon and other climate-change deniers funded an independent study which concluded that climate change is happening and that it is caused by man. Finally, she refers to old quotations from rogue scientists, many of whom, are not even experts in climatology and in some cases have been funded by oil and gas companies (see Climate Cover-Up by James Hoggan)

So Wente is completely hypocritical when she says that science needs healthy debate yet doesn’t produce any empirical evidence that such a debate is warranted. Put another way, she’s advocating for sound science based on healthy debate without using the very scientific principles upon which this is meant to occur.

I respect the views of the conservative right. They are legitimate and important in our society. But when these views ignore the unbiased science that is meant to provide society with knowledge to make decisions, they become an obstruction to democracy. A democratic society requires accurate information and opinions based on sound science. It needs media outlets that publish stories that reflect the findings of unbiased sources rather than stories that create inaccurate views in society.

The fact that this article has been published in Canada’s top newspaper is disgraceful. Wente’s views sadly align closely with the expected stance of our government in Durban on Monday. One has to wonder whether this column was published intentionally by the Globe and Mail as a political statement to defend against the tidal wave of criticism our country will face in the next week. When a media outlet like the Globe and Mail compromises its purpose of helping the public distinguish rhetoric from fact and myth from science, they have lost their role in society and, in my view, are no better than the infamous and highly misleading Fox News. Recently a study found that Fox News viewers were less informed than people who don’t watch the news at all. Is The Globe and Mail heading in that direction?
Posted by Mike Valente at 8:59 PM 5 comments: Links to this post