The Meaning of Life According to Brands 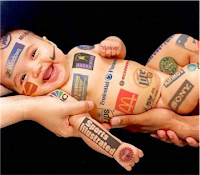 Naomi Klein's No Logo has become a rather influential book that discusses the growing presence of advertisements and branding in society and the corresponding effects it has on our daily lives. I had the pleasure of discussing some of the implications of her work with my students last week using the tobacco industry’s attempts to brand a cool and hip identity for their cigarettes.

Klein nicely chronicles the evolution of advertising over the past several decades where companies have shifted away from advertising a product to building a brand identity to which consumers can attribute meaning. Examples include Starbucks’ “It’s the romance of the coffee experience”, GM’s “New age of spirituality”, Polaroid’s “A social lubricant”, and Nike’s “Enhance people’s lives through sport and fitness”.

I asked my students whether they were okay with a society where the mechanisms through which we attach meaning and identity to our lives originate from business? To my surprise, I received three common responses:

Most common is that this is ultimately okay because consumers will always have a choice to detach from these identities. Indeed many of these students will be able to step back from these messages. But there is a presumption here that the average consumer has the ability and foresight to decouple from the emotional messages they are receiving. This view also overlooks the inherent incentive on the part of business to influence what information is available to the consumer, how that information is interpreted, and what choices consumers do have to respond to that information. These three cognitive pivot points are important levers for companies who are searching for repeat consumers. The rather pervasive climate change denial campaign is an effective illustration of how companies can play an effective role in shifting how consumers interpret information related to climate change science.

The second response is that this is a good thing. Our lives revolve around finding meaning and companies are merely one of the actors in society that allow this to happen. On the bright side, is there really something wrong with identifying yourself with the Body Shop’s brand of ethics and the environment? I often wonder whether people my students’ age are able to conceive of a life that isn’t solely dominated by commercial transactions when the only alternative to capitalism existed when they were 2 or 3 years old.

The third response is that this is a major issue and that if we allow this to go unchallenged in society, peoples’ interpretations of reality will be based on a confluence of company identity messages that dictate what a person should or should not be doing to find meaning in life. There was a time when the state assumed this role…a time when the church assumed this role. Now is the time when corporations assume this role. As Klein explained, this is where we start to see the profound imperialistic aspirations of capitalism. These students worry that in light of a corporation’s narrowly defined purpose of profit maximization, they are poorly positioned to determine what we as society define as meaningful.

There is no doubt that everything we see around us throughout our daily lives is a social construction. The very idea of an objective reality is indeed difficult to grasp. But does that mean that we should allow power imbalances to afford certain actors in society to inform that social construction in a way that benefits them? One of my students sent me a song that nicely answers this very question.
Posted by Mike Valente at 7:00 PM No comments: Links to this post

Canadians Losing Interest in the Environment

Canadian concern about the environment has dropped off a cliff in only 3 years with only 27% of Canadians concerned compared with 38% in 2008, according to a study conducted by Bensimon Byrne. Women exhibited the most striking drop where only 32% are concerned compared with 46% in 2008. Only 23% of Canadians are very motivated to make personal changes to benefit the environment although I'm sure this would have dropped dramatically had there been a proviso in the question that there would be a cost attached.

The authors explain that marketers need to consider the fact that environmental concerns are waning as a tool to attract consumers to their products. But certain environmental issues were more important than others such as the use of less packaging, recyclability and re-usability of the product rather than whether the company used greener fuels to run their operations.

The study found that environmental issues fall well behind concerns related to the price of gas, adequate pensions, the state of the economy, and ethics in politics. Either unethical politics has in the last 3 years threatened to dismantle the trust of Canadians or we've done a complete 180 on the importance of the environment.

The study authors attribute the drop to the dire economic situation, although 2008, when we cared about the environment, was the year that we experienced the greatest economic low. I recall studies in 2008 suggesting that "despite the economic horizon, consumers are still committed to acting green". On top of all this, at the time of the study, the Canadian economy was looking really good (unlike now).

The study seems to suggest that environmental consumerism is a bit of a fad, which dangerously suggests that company interest in this area will wane. This is a scary thought. I only wish that the environmental destruction we're causing as Canadians and global citizens echoed the reversible luxuries of a fad. But unfortunately market behaviour doesn't seem to reflect the realities of the environment.

I think consumers' thinning wallets is only part of the explanation here. Environmental issues are so distant in our minds. We don't see them around us like we do the gas prices on every street corner, stock market trends on every business website, the fluctuations of our investments through online banking and the behaviour of our politicians on the front page of every newspaper and website. So the media has a role here!

I think humanity is incredibly fickle when it comes to these sorts of issues that command long-term views and personal sacrifice. Only when a highly provocative video like The Inconvenient Truth comes out do we stop to think and perhaps make a couple of sacrifices. But each new documentary that illuminates the environmental realities we face has to out-revolutionize the previous for any of us to pay attention to it, otherwise it's the same old thing...more environmental awareness campaigns that we start to ignore. In fact, Al Gore is trying to revive this once global concern.

I haven't given up on my fellow Canadians yet. We're all very busy. But i know of many organizations, including businesses, that are playing very active roles in educating consumers about environmental issues and developing technologies and products that avoid the perceived trade-off between economic and ecological sustainability.
Posted by Mike Valente at 7:48 PM 1 comment: Links to this post