A study recently came out indicating that as a result of climate change, the outdoor rink season in Canada has shrunk since 1950. I find this fascinating in the backdrop of our country's relentless pursuit of energy-intensive fossil fuels reflected in its recent fast tracking of environmental assessment plans and the Alberta Wildrose party's complete denial of climate change, a party that apparently reflects the values of a majority of Albertans. Perhaps the potential loss of our common past-time may be what is necessary to rattle the cage of Canadian imprudence to the reality of climate change and our massive role in its unfolding.
Posted by Mike Valente at 6:21 AM No comments:

Is a Career in Investment Banking of Value to Society? 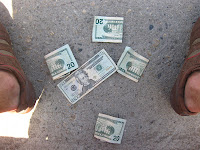 The recent exodus of former Goldman Sach’s (GS) employee Greg Smith has hit the online newsstands, including Canada’s very own Tim Kiladze talking about similar motives for leaving RBC. If you haven’t heard, Smith resigned from Goldman Sachs (GS) and went straight to the NYTimes to explain why. Smith started his career at GS as an intern before moving to New York and London. He stated that the environment is “as toxic and destructive as [he has] ever seen it”. His beef is with the unprecedented disconnect between the firm’s objectives and those of its customers, brought on by a culture with which he not longer identifies. This culture he explains shifted from one of pride and a collective belief in the organization to one of greed and profit at the expense of the consumer’s trust they inherited over 143 years. His spiel confirmed the highly critical view that the investment banks were indeed a substantial part of eroding a historic level of societal and economic value in 2008’s financial crisis.

As I read his story, I naturally thought of my students, especially when Smith talked about being part of the recruiting and summer intern process. The students I teach at Ivey tend to target the ABCs of the job market – accounting, banking, and consulting – with the second being most popular. In the fall of their final year in the business program, they are inundated with requests for interviews from the likes of Bain Capital, McKinsey, KPMG, Deloitte, and of course Goldman Sachs. These firms want the cream of the crop – the brightest of business students – something on which Ivey prides itself. Many of my students start in the financial services industry with an internship between their third and fourth years before landing a full time job with the investment bank by the fall. Both faculty and students perceive an investment banking job at Goldman Sachs (or its equivalent) to be the ultimate accomplishment, the job that only a selected few will have the fortune of occupying.

I first noticed this in my first year teaching at Ivey in 2010/2011. Two years after the start of the marathon recession, the financial crisis was still top of mind. It was about this time (a few months earlier) that Goldman Sachs was all over the news because they agreed to pay $550 million to the SEC for selling mortgage securities to clients it knew would fail. – precisely what Smith is talking about. But that didn’t seem to phase the top student in my class (and likely of the entire program) who had an internship with GS and accepted a position there upon graduation. Nor did it phase his peers who looked up to him with admiration, not only because of his intellectual prowess in the classroom to which I can surely attest but also because he got the “top job” that many, if not all, Ivey students aspire to get. To put this another way, many of my students aspire to be a position like Greg Smith making hundreds of thousands of dollars a year.

Smith also talked about the mentality of junior analysts where a common question he received from them was, “How much money did we make off the client?”. There is a rather pervasive mentality among my students that there is nothing wrong with this. Many of them are true loyalists to the ‘greed is good’ mantra sung by Milton Friedman and Gordon Gecko. They struggle with the idea that consumers can be manipulated and exploited and have a rather naïve perception that the market will always correct behaviour like what Smith is talking about.

What does it say when the top students in Western society are bred to seek and perform well at an institution that can have substantial negative implications for society? Whereas these negative implications have always been expressed through activists, indigenous people, and the environment, what this story suggests is that the negative implications have emerged through the customer. This dilemma speaks to a more important question related to the growing inability of capitalism to achieve the broader social goals that Adam Smith once proclaimed. This is because modern day business schools presume that maximizing profitability is ultimately the best thing that business leaders can do for society.

What Greg Smith is describing should not come as a surprise. While it has become quite mainstream that the pursuit of profitability can have negative consequences for marginalized segments of society and seemingly distant environmental systems, what is emerging now is that its pursuit is demonstrating negative implications for a more immediate stakeholder – consumers. Gone are the days where we can presume that the pursuit of profitability is by default maximizing customer value. Adam Smith’s view that entrepreneurs would search for profitable ways to fill needs of his/her neighbors, while innovative, underestimated that these entrepreneurs would essentially search for ways to bypass the consumer if such an opportunity arose. And when the top businesses in the world are able to attract the world’s top talent, you can bet that they will be well positioned to exploit this talent and remove any of the unnecessary costs that come with client satisfaction. One way to think about this is that capitalism’s invisible hand has turned on itself because corporate greed that would typically be corrected through market mechanisms is usurped by the very foundation upon which we’ve established western society.

While the capitalist system has garnered tremendous benefits since its initiation centuries ago, there is no question among leading academics and executives that its usefulness and ability to fairly distribute wealth is waning. But the difficult thing is that capitalism put in the most innovative fail safe when you consider the fact that the capturing of wealth through capitalism affords you the power to maintain the system so that the wealth continues to flow. In other words, we underestimated our ability and impudence to manipulate the very system that did so well for us.

I’m excited to discuss the Greg Smith story with my students in September to hear what they think of his views. If what he was saying were at all true, would this discourage them from working in a firm like Goldman Sachs or even in the financial services industry? If not, what is it that students are eager to accomplish with their Ivey degree? Extending this to a more generally question, Smith’s article is a call for capitalists, business professors, and executives to take a hard look in the mirror and to ask themselves: What is the purpose of business in society?

Posted by Mike Valente at 5:35 PM No comments: