Who's to Blame for Household Debt Levels? 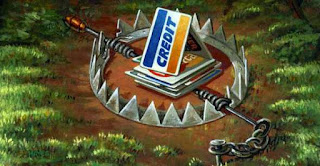 Canadian debt levels are among the highest of developed country nations, beyond those of Americans and Britons.  Recently, we’ve been warned that these debt levels are far worse than previously thought with growing consensus among experts that Canadians aren’t immune from the downfall they witnessed among their American neighbors.  The only bright side, ironically, tends to be the eroding asset base of Canadians, which is largely dependent on a deteriorating housing market.  As Madani at Capital Economics explained: “Debt growth dynamics over the last decade look eerily similar to the U.S. experience, just before their dramatic housing bust.”

In response, the discussion in the media tends to revolve around the dilemma the Bank of Canada faces in its efforts to combat a struggling global economy on the one hand, which requires a lowering of interest rates, and rising household debt levels on the other, which paradoxically requires the raising of interest rates.  I find our reliance on the Bank of Canada amusing because nowhere in our discussion of this dilemma are we considering what I think is the elephant in the room, which I refer to as an intrinsic motivation of big banks to exploit consumers.

3 Types of Lending
To understand this, it’s worthwhile to perhaps simplistically distinguish among three types of lending practices.  The first is responsible lending where banks respond to the needs and wants of informed and educated consumers as a means to lubricate the economy to improve societal welfare, The second is called careless lending, an extreme level of lending that we saw in the US where, due to the deferral of risk, lenders provide credit to those highly susceptible to default.  The conversation in Canada often ends here as loyalists to the invisible hand argue that banks have no incentive to employ the latter practice because our regulation makes it so that consumer default results in bank losses.  In fact, recently, National Bank Financial analysis Peter Routledge explained

“That these consumer debt levels are a non issue because the average loss rates on banks’ credit cards has fallen back down to about 4 percent, a level not seen since 2008 and the average value accounts whose payments are 90 days or more delinquent is just 1 per cent of the portfolio.”

He concludes that while Canadian debt levels are high, the default rates clearly indicate that this is a non-issue.  The fascinating thing about this absurd and completely misguided conclusion and others that say debt levels isn’t a big deal is that he’s using defaults as a proxy for debt problems rather than considering the idea that perhaps banks have just gotten better at finding ways to exploit consumers without sustaining the cost of default.

This leads me to an overlooked third category of lending practices that I think represents a majority of the types of loans banks make called exploitative lending, a middle ground between the first two extremes where banks search for gaps in consumer knowledge to impose on them the maximum amount of credit possible without them defaulting.  It is this third type of lending that while difficult to pin down is critical because it puts into clear focus the inherent conflict between bank and societal interests, a conflict that I believe is responsible for today’s debt levels.  A recent report from an equity research firm in Toronto looking into the ease at which consumers can get mortgages found that banks are bending over backwards to make it easy to take the plunge and buy.  It noted: "At once sales centre, BMO was willing to lend half of the required 20 per cent down payment.  Apparently, BMO is qualifying the prospective borrower on the full mortgage before approving the down-payment loan".


My Own Experience
For the last several years, I’ve been bombarded with offers from my and other banks to take advantage of credit opportunities, to increase the credit limit on my personal line of credit, my visa card, or to apply for a home secured personal line of credit.  The latter came up when I was asking for a $5000 increase in the credit limit of my existing PLC, at which time I was encouraged to apply for a home secured line of credit that would provide me with 40 times the amount I was originally asking for and 8 times what I had already.  The interesting point of the conversation was that the person on the phone forgot completely about my original request of $5000.  On top of all this, I recently received my fourth communication in a year from my bank offering a 33% increasing in my visa credit despite the fact that since first getting a visa card 17 years ago I have never come close to having a balance of more than 33% of my credit limit for more than 4 weeks.  In other words, I have never maintained a balance on my visa card.

Now what is going on here?  Is my bank really looking out for my needs by offering credit to me that is going to improve my life?  Sadly, I don’t think banks are experts at improving the quality of life of their consumers.  They are experts at finding ways in which to capture value from their consumers.  In this case, value comes in the form of disposable income.  In my case, the bank has learned through reams of data on people sharing my demographic and psychographic characteristics that increasing my credit limit in multiple ways leads to a false sense of security that I have greater disposable income through which to meet needs I didn't know I had.  More specifically, they know that because I’m comfortable with a 33% use of my credit limit and that my income level has not increased by a similar amount, increasing that credit limit will eventually lead to payments that exceed my monthly income thereby locking me into a perpetual state of interest payments and a high debt-income ratio. To ease consumers into what it means to have a large balance on their PLC, banks require that consumers keep a minimum balance on new PLCs as a means to avoid initial registration fees.  After the 3 months of a high balance, the hope is that the consumer is accustomed to such a debt level while at the same time hasn't put money away to pay this off.

Throughout my undergraduate university education, I worked at one of these financial institutions as a customer service representative (teller).  I was awarded cash on the spot if I signed up someone for a credit card.  We were very strongly encouraged to look at the birthdates of younger looking clients to see if they were 18 and were now eligible for a credit card.  I recall learning clever tactics to convince them to get a card such as benefits to their credit rating for future credit access and the benefits of receiving free money for up to a six-week period.  I realize today that this represents a dramatically scaled-down version of a more general culture of pushing credit on unbeknownst consumers.

From the bankers’ perspective, think about how easy it would be to slide down the slippery slope of exploitative lending by finding ways to convince consumers to take on more credit that they don’t need.  Bankers are very bright people, and while well intentioned at best, they understand the psychology behind consumer purchase decisions.  They know that a majority of the consumer population struggles to differentiate between cash and credit and that when consumers see a high credit limit they are more willing to use that credit in lieu of cash.  If you were a bank, you would have every motivation to push credit on consumers just up to the point prior to bankruptcy.  Call it greed or good business, the point is that this is a reality that we’re not talking about.

Consumer Responsibility
One of the main reasons why this discussion hasn’t yet occurred is because the very conservative Canadian culture would argue that it’s up to Canadian consumers to spend responsibly and therefore to borrow responsibly.  Carney himself, in his message to Canadians, tends to use this approach.  What this completely overlooks however is how the power of Canadian financial institutions in influencing consumer behaviour in Canada.

Several months back I was somewhat lambasted by the Sustainability Director of one of the Canadian banks because I criticized their green initiatives as green washing, a mere disguise for the blatant disregard that they oftentimes demonstrate to society.  My main criticism, like with many other firms I comment on, is that on the one hand the bank is marketing the hell out of their commitment to renewable energy and energy efficiency in their retail branches but on the other ignores how their ongoing daily activities with business and individual consumers leaves them culpable to debt issues.

The banks got their first scare in 2008 with the financial crisis revealing that the inherent motivation of the financial industry does not necessarily align with society’s interests.  As Canadians figure out that debt levels, like cigarette addiction rates, are not necessarily caused by consumer irresponsibility but rather a blatant attempt by banks to exploit the vulnerabilities of their consumers, a major backlash will ensue…perhaps one so drastic that they end up like their tobacco company counterparts, cowering in a corner begging for mercy.
Posted by Mike Valente at 5:37 PM 2 comments: