Geo-Engineering: The Ultimate Mask for the Elephant in the Room 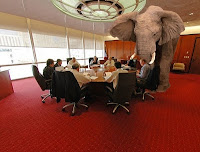 I recall a couple of years ago reading an article in the Globe and Mail that I had originally thought to be a farce because it spoke of three geo-engineered solutions to combat global warming. One was to place giant mirrors in space to reflect the sun intermittently as needed. Another was to catalyze volcanic activity to spew sulphur into the atmosphere (sulphur acts like tiny mirrors, deflecting light and heat back into space) while the third was to launch dust particles in the atmosphere to weaken the sun’s intensity on the Earth’s surface. I never thought the day would come where such ideas would make the front page of The Economist (online version). Geo-engineering is the term used to describe man-made technologies meant to reverse global warming. But unlike any mitigation strategy that reduces emissions at its source, geo-engineering involves recognizing that global warming is inevitable and subsequently designing technological fixes to deal with it.

More and more scientists are taking this idea seriously. In addition to polluting the stratosphere with sulphuric acid, another more recent idea is to deposit lime into the oceans to free up space for carbon dioxide. The article also discusses the idea of locking sections of Greenland’s glaciers to prevent them from falling into the oceans.

The fact that these ideas represent serious conversations among some of the brightest minds out there may be a cause for concern. The very idea that they are using computer models to project the outcome of injecting large amounts of sulphuric acid into the atmosphere is a fine illustration of the pervasive anthropocentric worldview that dominates our civilization. We tend to think that we’ve mastered nature and through this mastery can develop technologies to manipulate the planet’s ecosystems in a way that will reverse any negative impacts we have on it. I don’t think there are many scientists out there that would disagree with the conjecture that nature is incredibly complex and that our understanding of such complexity has only reached tip of the proverbial iceberg.

In response to a limited understanding combined with an egocentric disposition, we engage in reductionism where we examine seemingly simplistic cause and effect relationships limited to a small number of nature’s systems. Launching sulphuric acid in the air or liming our oceans to combat global warming says nothing about the consequential impact on other systems on which we depend. These band aid-like solutions only address symptoms of a more fundamental and underlying issue, which quite naturally, results in the need for more band aid solutions as unpredictable outcomes emerge from the original uneducated and vain response.

What happens if we do find a solution that would combat global warming, then what? What symptoms arise next? Do we jump from band aid solution to band aid solution learning about the complexities of nature the hard way? And if we are successful, however temporarily, does that not send humanity the message: “keep on consuming, technology will always provide the solution”?

There’s an elephant in the room here that we keep avoiding – our behaviour. No one wants to talk about the fact that we simply cannot stop extracting, manufacturing, producing, packaging, consuming, and wasting nor can we develop the courage to make decisions that represent a change in lifestyle today for future generations. As a result we want the best of both worlds – we want to keep our behaviour the same and rely on technology to fix the consequential externalities. Is this any different than consuming to a state of obesity and then relying on a pill to make it all better or driving your SUV to the grocery story and then pulling reusable shopping bags out of the back or indulging in flights around the world only to buy offsets, or making millions of dollars in profits at the expense of indigenous communities only to donate to a charity that advocates for human rights?

One of my students rejects any notion that the issues we’re facing today are any different from the issues we’ve faced in the past and points to technology and human ingenuity as the savior to all our problems. To me, this is a specious argument and ultimately a further reflection of our anthropocentric worldview. While I acknowledge the strong powers of innovation, there comes a point where we can’t have everything; where there are limits to our consumption, limits to the Earth’s carrying capacity, limits to growth. To deny this is to deny our interdependence with nature and the corresponding limits it imposes on us.
Posted by Mike Valente at 8:14 PM No comments: