Business strategy scholar Michael Porter recently presented a TED Talk entitled “Why business can be good at solving social problems”.   While I admire his optimism, he tends to ignore some very fundamental business strategy frameworks that not only contributed to the social problems he’s talking about but would ultimately usurp any ambition to resolve them.  I present three of his main messages and then discuss what I believe he fundamentally overlooks.

1.  Business as Source of Problems:  Porter motivates his talk by remarking on the growing consensus that business is seen as the main contributor to today’s societal problems rather than the solution.  That said, he appears to struggle with “why we’re having so much trouble dealing with these problems”.  I’m fascinated by this because he fails to connect these social problems to the very frameworks that he devised three decades ago.  Back in the 1980s[1], Michael Porter started building an iconic name in business strategy when he flipped around the industrial organization (IO) model that associated firm conduct and performance with industry structure.  In this economic model, firm returns are a function of certain industry conditions such as entry barriers faced by entrepreneurs, the number and relative size of competitors, the existence and degree of product differentiation in the industry, the amount of power buyers and suppliers have in the industry and the number of substitutes available.  As business scholar Jay Barney explained in 1986[2], the IO model was developed to assist government policy makers to achieve “socially optimal levels of intra-industry competition” by devising regulation that would structure industries in ways that maximized benefits for society.


In his development of a normative theory of competitive strategy, Porter and other strategy scholars turned the policy objectives of this model upside down.  Rather than use this model to assist policy makers to keep industries more competitive, strategy was born with the idea that business, in their effort to generate greater profit, should focus on creating or modifying industry characteristics in ways that generate higher returns.  In effect, firms should create higher barriers to entry, reduce the number of competitors, reduce buyer power by increasing product differentiation, eliminate substitutes, and reduce supplier power by achieving market power or holding suppliers hostage.   We see this behaviour all the time as part of routine business practice.  The blatant irony in Porter’s talk is that the main reason why societal problems persist today is that business graduates enter management with an injection of competitive strategy thinking that advises them quite explicitly to appropriate the value that would have otherwise gone to society.

2)  Business as Part of the Solution:  Porter spends a lot of time explaining why business has to be part of the solution.  To do so, he tends to revert back to the bare bones of capitalism that Adam Smith introduced in the 1700s.  The whole point of capitalism is to represent an efficient mechanism through which resources can be allocated to address social issues/needs.  Porter explains that, unlike other actors in society, business is the only actor that can generate the wealth needed to scale the solution to social problems.  Profit, he states, is “magic” because it allows business to reinvest capital into a solution to a societal problem so that it can be sustained and scaled.  He brags that other actors in society, be they non-governmental or governmental organizations, are completely dependent on the business enterprise to generate this wealth that would then be distributed in the form of taxes to governments and donations to NGOs.

While he acknowledges the unprecedented growth of NGOs in recent decades, he doesn’t at all attribute this growth to the fact that the conventional non-governmental actor – business – has failed to do its job as Adam Smith had intended.  Ironically, Porter advises that we go back to business as the solution, as it was originally intended, even though his teachings have instructed business on how to usurp this system for its own ends, which created the NGOs in the first place.

Porter explains that NGOs and governments have not always appreciated the connection between social and economic value.  In his 2006 article entitled Strategy and Society [3], he explains that “if governments, NGOs, and other participants in civil society weaken the ability of business to operate productively, they may win battles but will lose the war, as corporate and regional competitiveness fade, wages stagnate, jobs disappear, and the wealth that pays taxes and supports nonprofit contributions evaporates” (pg. 83).  His point is that NGOs fail to grasp the idea that healthy societies need healthy business, explaining that “no social program can rival the business sector when it comes to creating jobs, wealth, and innovation that improves standards of living and social conditions over time”.  He explains that governments and NGOs forget the “basic truth” that “by providing jobs, investing capital, purchasing goods, and doing business every day, corporations have a profound and positive influence on society.  The most important thing a corporation can do for society, and for any community, is contribute to a prosperous economy”.  Porter appears to criticize non-business actors for not acknowledging the role of business in society, almost to suggest that had these non-business actors realized this, we wouldn’t have the problems we have today.

What drives me absolutely bonkers about this rhetoric is that Porter’s referral back to basic capitalism ignores the very fact that despite this model being introduced in the 1700s, business strategists in the last few decades have advised managers on how to avoid creating value for society and to instead appropriate value from society.  Porter is silent on this and instead offers a Utopian solution that suggests that business should really do this because it makes business sense to do so.  But if it did, then why are so many businesses resisting?  Porter blames this on short-termism.   The reality is that since Porter’s scholarly work in the 1980s, business has grown quite effective at taking his teachings to an unprecedented level.  For instance, why bother pursuing the arduous task of addressing societal issues when you can create an industry structure that generates more profit?  Why bother meeting consumer needs when you can manipulate those needs or at the very least reduce consumer power and choice to products/services that allow you to capture more profit?  Porter essentially taught business to manipulate those very structures that were meant to encourage them to address social needs.  Interestingly, when we line up the key time periods when things when irreversibly ‘south’ for society, we see a rather striking correlation with the timing of Porter’s teachings (see adjacent figure below). 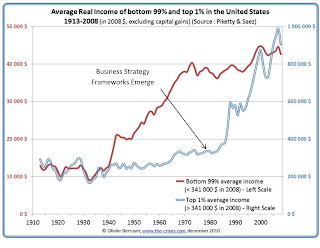 3.  False Tradeoff.  Porter ends his talk by highlighting the false tradeoff that tends to exist in the minds of managers between profit and social good.  For instance, it is costly to create a safe working environment or to reduce pollution.  He argues that the reality is the opposite by referring to the proverbial low-hanging fruit where businesses can save on costs if they pollute less because they are more efficiently using resources or if they create a safe working environment because there are less accidents and productivity levels increase.  To Porter, there is a fundamental synergy between business and societal goals.

No doubt there are many examples of business demonstrating this sort of synergy.  Scholars and practitioners have been talking about social entrepreneurship quite extensively for over a decade; much of what Porter is referring to is not new.  But let’s try to understand why these sorts of examples are not dominating business behaviour.   Again, it is important to go back to the fundamentals of strategic management that Porter helped establish.  One of the primary reasons social entrepreneurs and NGOs struggle is because they are typically up against a system that is rigged against them.  Consider entrepreneurs in green energy.  Despite climate change and our dependence on fossil fuel sources of energy representing a major social issue, these entrepreneurs are up against a very aggressive lobbying effort to erode any political effort to regulate fossil fuel intensive industries or to subsidize green energy initiatives.  Or consider Better Place, an innovative company that aims to establish a transportation platform that would replace the internal combustion engine.  There is no doubt that despite the fact that many of today’s social issues can be traced to oil, there have been and will continue to be a small group of very powerful interests that will work hard to make sure this business model doesn’t happen.

Now where does this behaviour come from?  Remember how the industry-conduct-performance framework was meant to assist government in regulating industries so that they remain competitive and committed to societal interests?  Well corporate political activity, a branch of business strategy, studies how companies work to manipulate the political landscape in ways that favour their interests.  This is precisely what Michael Porter advised companies to do when he suggested that business should work to create favorable industry environments.  By favourable, one can easily extend that to favourable political environments.  Rather than sit passively and hope that such a regulatory environment will emerge for your business, managers have learned to create such environments.  This sort of behaviour takes place all over the world as many activists refer to crony capitalism and the realities of our plutocracy.

As a business strategist myself, it’s repugnant to see Michael Porter standing up on TED touting the need to unleash the power of business and the capitalist system as if society was unaware of what this system was intended to accomplish, completely ignoring that it was his teachings and frameworks that played an important role in derailing this system.  The core issue is not that the model is wrong.  I agree with Porter that business can be a critical actor when it comes to social issues because it does have the power to generate the residual capital to reinvest and scale the solution to some of our most intractable problems.  The issue is that the power imbalance among societal actors, alongside the neoliberal ideology that dominates our global economy, has allowed business to usurp this model to achieve its own ends at the expense of society.  Before we arrogantly present business as the hero, we should first discuss how and why business has been, and continues to be, the villain.