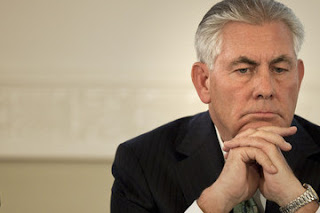 Yesterday, CEO of ExxonMobil Corp, Mr. Rex Tillerson argued the following to his shareholders when defining the relentless pursuit of oil production: “What good is it to save the planet if humanity suffers?”  He added, “We do not see a viable pathway with any known technology today to achieve the 350 (parts per million of carbon) outcome that is not devastating to economies, societies and people’s health and well-being around the world”. According to the Globe and Mail, Tillerson made these comments in response to environmental activists’ demands for greenhouse gas emission targets.

Since when did Rex Tillerson develop the expertise to comment on the welfare of humanity, or people’s health and well-being?  The very fact that he sees no connection between environmental destruction brought on by oil production today and in the future and people’s health is one thing but the fact that he believes that he is well-positioned, as an executive of an oil and gas company, to publicly comment on the “well-being” of people is another and, in my view, astounding.

A quick glance at his credentials, Mr. Tillerson earned a Bachelor of Science in civil engineering from the University of Texas at Austin in 1975, at which time he started at Exxon as an engineer.  According to Wikipedia, Mr. Tillerson held various positions in Exxon, domestically and internationally until becoming Executive Vice President of ExxonMobil Development Company in 1999.  He was elected chairman and CEO on January 1st, 2006.  I was unable to find any background information on Tillerson that would lead one to suggest that his views on what is good or bad for humanity should be taken seriously and/or is backed by a trail of work and sound science that would permit him to make such judgments.

Tillersman’s comments are particularly striking for a number of reasons but for the sake of space, I'll focus on one.  Notice the assumption that what's best for humanity is an unfettered flow of oil.  This is a loaded statement because it overlooks any ability on the public’s part to innovate outside of oil and suggests that if we don’t allow oil to continue unabated, we’ll de-evolve to our caves.  The hypocrisy is so vivid when you consider that in the same article Tillersman talks about our ability to adapt when he says “or do you want to talk about what’s the path we should be on and how do we mitigate and prepare for the consequences as they present themselves”.

Just a week or so ago, Seth Kursman, VP of communications, sustainability and government affairs at Canadian softwood lumber company Resolute explained, in reaction to the failed talks with environmental groups, that environmentalist demands “would have affected thousands of people’s lives”, adding. “for us to accept that, it would not only be inappropriate, it would be downright irresponsible”.  He expressed his disappointment that a workable plan could not be reached that would balance conservation efforts with social and economic considerations.   Since when did a softwood lumber company develop the expertise to comment on the what does or does not represent social and economic value to a community?  I'm struggling to understand how expertise in lumber production is transferable to expertise on socio-economic welfare.  Am I missing something?

Canada’s Ezra Levant, along with a number of oil sands executives and conservative pundits such as Kathryn Marshall (spokesperson for EthicalOrg.com), constantly argue for the importance of exploiting the oil sands because it is the ethical oil source.  They argue that doing so would represent an opportunity to combat tyrannical governments, oppression, and human rights abuses that tend to pervade in those regions where oil tends to exist.  Since when did oil and gas companies and their puppets become experts on developing country governments and human rights?  As I mention in a previous post, Kathryn Marshall shows her deep concern that President Barack Obama has not kept his promise to the American public to wean the US off of oil coming from the Middle East.  To justify her ends, she points to the president’s broken promises to his people, the government's complicity in supporting despotic regimes, and his failure to look out for the country’s best interests.  How sincere of Marshall.  I didn’t know that the spokesperson for Ethicaloil.org had such expertise in US politics and knowledge of the American people.

Likewise, in July of 2010, Pierre Duhaime, the now shamed former CEO of SNC-Lavalin, explained in an article that the exploitation of the oil sands is critical because it is a “major contributor to employment, investment and income”.  He added that the government revenue of $19.6 billion gained from oil sands production in a given year “can pay for the schools, hospitals, roads and services that sustain our living standard”.  Since when does an executive in the oil and gas supply chain have the expertise to comment on employment, investment and income at a national level?  And are you Mr. Duhaime well positioned to comment on our living standard?  I don’t see anything in your CV to suggest that you have expertise in providing views on what living standard we should be aiming for, let alone sustaining.

Of course, I haven’t yet mentioned the obvious conflict of interest screaming out to those reading these views.  What’s most disturbing is the façade these influential people exhibit, a façade that disguises the real objective to increase production of the finite natural resources to enhance their bottom line, salary, and bonus.  Because they know how the public will react to such a self-serving objective, they need to translate this desire into something that resonates with the public, even though they are not at all qualified to make such claims.  I feel sorry for these people because they have to resort to making spurious connections between their core business/expertise/interest with the public interest to self-justify their own individual interests. But that’s just it, because these public ends (e.g. health care, well-being) are so disconnected from the means of their core business, they completely miss the fact that there are multiple ways in which to achieve these ends, thereby overlooking the self-fulfilling prophecy they’ve just created.

The unwarranted claiming of expertise is not limited to business.  Scientists and environmental activists have also been known to put forth views on topics on which they have no expertise.  Bill McKibbon, a well-known Canadian environmentalist, talked about how oil sands development is "starting to do real damage to the country’s character”.  He added that “Indigenous groups have explained over and over that the tar sands are damaging traditional ways of life, not to mention life and health”.  I’m sorry Mr. McKibbon, since when were you qualified to make claims about Canada’s character?  If you’re not qualified to do so as an environmental scientist, which I doubt you are, on what empirical basis are you able to make these claims?  Do you have evidence that Canada's character is being damaged by this industrial development? Likewise, climatologists too often push the limits of their expertise when they get into discussions of the need for certain kinds of renewable energy such as Andrew Weaver’s view that we should focus on nuclear energy to simply move away from coal based on his notion that because renewables are far from mainstream commercial viability, nuclear is the best way to go despite the non-carbon implications.  Why is the media giving a climatologist the public platform through which to comment on energy policy?

It’s downright insulting in my view to listen to these influential individuals - that the media unfortunately props up - put forth views without the backing of any credible competence or reference to empirical research in the area upon which they base their view.  Their perceived power makes it difficult for the layperson to step back and question whether these individuals have any right or competence to make comments in this regard.